Don't Try and Knock Off A Bank In Coffeyville 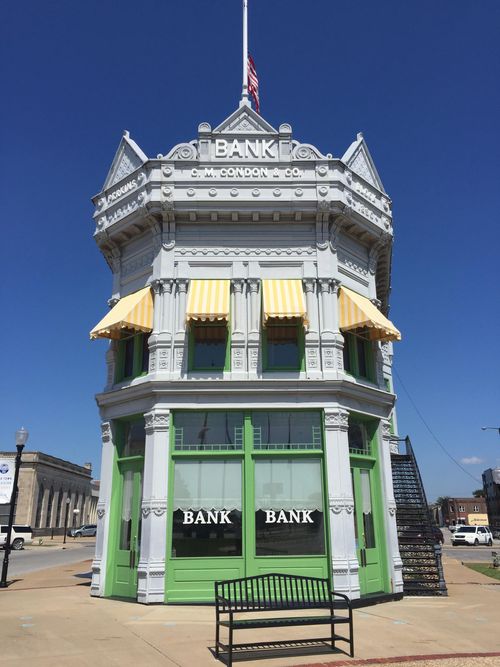 After watching the video, I walked outside to check out the scene of the crime. One of the banks, the alley, and the hardware store are still there. The Chamber of commerce is currently located in the remaining bank and Hisham’s Hardware is part of the True Value franchise. I have a thing for old hardware stores and decided I had to stop in Hisham’s. I mentioned to the two clerks that I just left the museum and the fellow started talking about how some people wanted to talk away our history, clearly talking about the controversy surrounding the confederate statues. I wasn’t about to engage in that conversation but I thought it was more than a little ironic that there is a very nice bronze plague where each of the townsmen died, and a blue “chalk” body outline where each of the outlaws fell.
I had two more performances scheduled for the afternoon, one at a very nice apartment complex and the other at an assisted living facility.  I took the time to drive around town and get to know my way around town, including checking out some of the other performance locations. There was the downtown historic district, a number of renovated as well as closed storefronts, the community college campus, a couple of strip developments, the box store shopping complex right outside of town, a couple historical agricultural and manufacturing business centers, and the refinery. The commercial strip reminded me of the James McMurtry song, “I’m Not From Here”. The community college and the legacy of the shoot out are the things that make Coffeyville unique. And it also seemed to me that Coffeyville has quite a few churches and quite a few liquor stores!
The remaining performances were very pleasant, and I had a wonderful conversation with a woman who used to fly fish with her husband in South Dakota. The last presentation of the day was done at 4:00 so I intended to explore the countryside. I told one of the fellows in my last audience I want to do, and he said “Well, if you don’t get around to it, you won’t be missing much. Lotta farmland out there.” Which of course I already knew. The landscape actually reminded me of southwestern Ohio when I was a kid. Some rolling hills, and in addition to the row crops, there was a lot of hay and pasture land, only the fields were bigger and there were prairie relics alongside the roads. Tom Paxton wrote a song about the Verdigris River which flows by Coffeyville, or should I say, the town was built alongside the Verdigris. There are large flood control dikes alongside the river and consequently, the down-cutting of the waterway is very noticeable. Even so, the community has experienced several serious floods in the past15 years. I thought about going fishing but opted not to. The thoughts of navigating down the dike and the hassle of getting a license were enough of a deterrent. In retrospect, I can see it is those small barriers that contribute to the decline of hunting and fishing licenses. 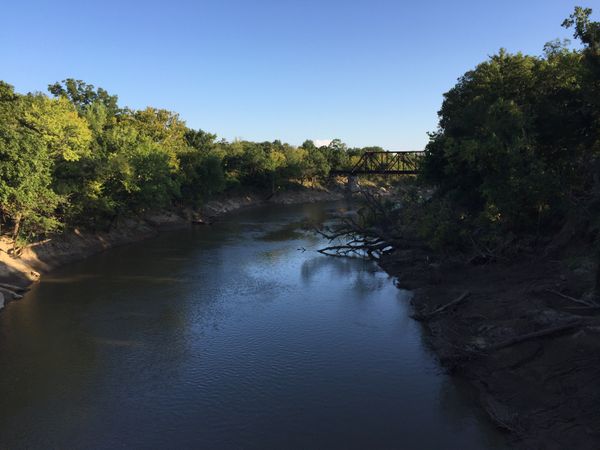 Tuesday morning was the performance in the college theater. I have spent considerable time thinking about crafting a message to encourage people to get out of doors and how to incorporate that into my performance. I realized that one challenge I needed to overcome was that some of the older folks weren’t able to get out of doors, so I had developed an idea to modify my delivery for the senior programs to talk about their childhood experiences as compared to the way their grandkids are growing up. After doing three on Monday this seemed to be working! The college presentation was going to be full-on: get outside, find a life long outdoor activity, this is important to help you cope with the stress of day to day living and fly fishing is a great activity to help you do both. And with a little modification, this was the same message I would have for the high school students. So I was anxious to try this out!
In addition to students from the theater and humanities programs, there were quite a few folks that weren't affiliated with the college. I arrived 45 minutes before showtime to get a soundcheck and everything dialed in. I walked into the theater and introduced myself to Ginni Phillips,  the Humanities Project Coordinator and Ryan Mahanah, the Director of the Theater Department. I was immediately asked if I played fantasy football!  And there was a healthy conversation going on about the blowout between the Titans and the Browns! Was I a Pat’s Fan, Did I buy into the Browns hype... Evidently Coffeyville is far enough away from any major sports teams that people feel free to align themselves to teams of their choosing! And later in the week, I came across a shrine to the Pittsburg Steelers. What can you say? Football in America!

I was excited to talk with Ginni and very interested in finding out more about the structure of the program how it was funded and who’s idea it was.  She told me she had only been in this position for a few years and really didn’t have much history to share, and that Joann from Artist of Note would probably know more about how the series is funded and when it started. It is a great idea and could be a wonderful program for other communities to emulate. 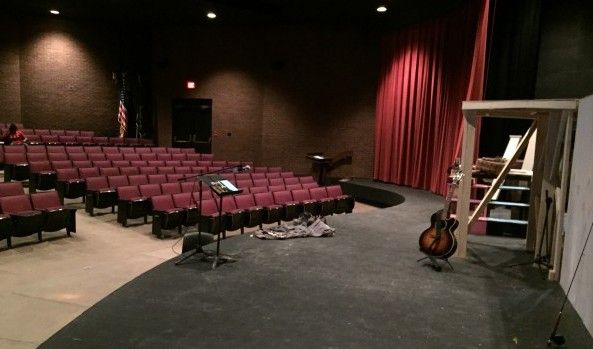 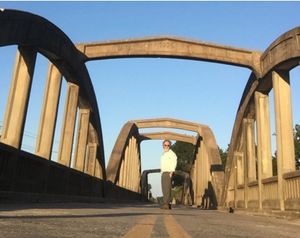