Brought On By A Sip Of Coffee 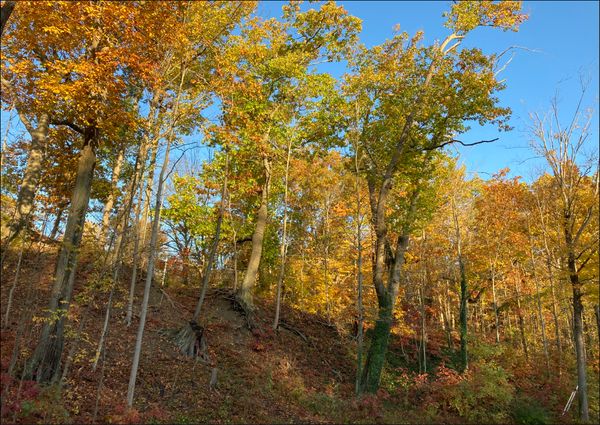 This morning I made a very strong cup of coffee and my first sip reminded me of deer hunting with my father. It was something we started doing together when I was 13. He and my uncle Marvin allowed me and my cousin, Keith, to join them on what was their third Ohio deer hunting season. They had borrowed a truck with a huge camper shell for the four of us to use and so it began.

There were many memories created on that first trip, and their recollection brings a smile to my face. I hate to say it, but I am the only member of that party that is still alive. Without getting into a deep narrative about that first year, I can summarize by saying my uncle and father were completely shocked at how much two teenage boys can eat. Back then it was a big deal to even see a deer in Ohio. Some things have definitely changed. I am sure some of you will be happy to read no deer were harmed in the making of this memory.

For the next fifty years, at daybreak on the Monday following Thanksgiving, I was sitting in the woods somewhere in Ohio. For the majority of those mornings, my father was sitting somewhere nearby. The early years were spent near the border of Pike and Jackson Counties in south central Ohio. Pop had some acquaintances with property down there and over the years we had secured permission to hunt on several hundred acres. Initially, it was just the four of us. That group waxed and waned over the years to include other relatives, and the accommodations shifted from tent camping to trailers, then back to tents again. I can assure you that tent camping in late November is an adventure unto its own, but add the notion of heading out into the woods an hour before dawn and you have the making of some very special memories.

For the first ten years or so, Dad always cooked, and he always made a pretty strong cup of coffee. For whatever reason, I had a pretty heavy hand this morning and that first taste brought back a flood of memories that were so powerful, I set aside my plans for a bit to take a moment to capture this little reflection.

In the mid 80’s I took a position as the Director of the Geauga Park District and my family and I moved to northeast Ohio. For several years the only deer hunting dad and I did was an occasional late-season muzzle-loader outing. One year, I had the opportunity to drive back down south and I came strolling into the old deer camp completely unannounced and joined up with two of my uncles, several cousins, and my pop. Dad was in his early 70s and the camping conditions were pretty rough. I knew the year before he had taken a fall and whacked his head on a tree, and I thought it might be a good idea to go check the situation out.

The terrain in south-central Ohio is fairly rugged, and the idea of my 70-year-old dad walking around without a partner concerned me. With the best of gear, winter tent camping is tough and this was not a group with a penchant for state-of-the-art outdoor equipment. The overnight accommodations were minimal at best. There was more than a little after-hour drinking and I knew dad didn’t care for that so figured I would try to convince Pop to come up and hunt with me and my son Phil in the relative luxury of the Conneaut Creek Club. There was a primitive but very functional cabin, nice trails, and much less challenging terrain. Ultimately, I convinced him to come north and for the next 15 years or so, barring any health issues, pop would come up a join us for a few days.

For several years there we had quite the “army” of deer hunters, my son, son-in-law, nephew, Dad, several friends, and on a couple of occasions, two of my non-hunting brothers. We shared some great meals, had more than a few adventures, and shared innumerable laughs. We created some really special memories. One year, D’Arcy Egan from the Cleveland Plain Dealer joined us and wrote an article about the “traditional Madewell Deer Camp”. Dad was so proud of that article, that he asked me to get a copy framed to hang on the dining room wall. 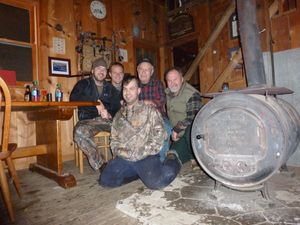 Dad lived a long life, and his passing was the about as perfect conclusion to life as anyone could ask for. I think the last year he hunted with us he was 89. People age and pass on, or move away, and priorities and obligations change. My son Phil now lives in Bozeman, and many of the regulars who joined us have also moved away. It is just not the same.

2020 was the first time in fifty years, I was not in the woods on the opening day of the Ohio deer gun season.

Some of the fellows at the club have asked me to organize and conduct the 2022 deer camp, and I will, but nearly all of the faces have changed. But perhaps I can help them build some memories and pass on a bit of the special camaraderie that we shared in our “deer camp” for so many years.

This was a good cup of coffee.