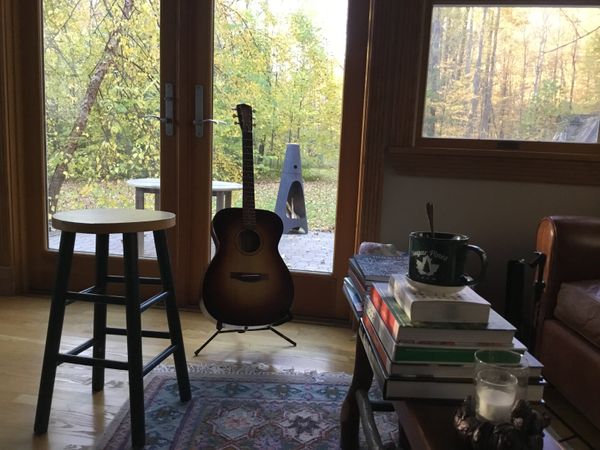 Funny how the recollection of a song can trigger so many memories and emotions!

So for some reason, as I was padding out to the freezer this morning to get some bread, I found myself singing the beautiful Elvis Costello song, “My Aim Is True”. In addition to immersing myself in the lovely melody and the haunting storyline, I began to stroll down a wonderful path of emotional recollection. There are many songs on that album that are simply great and after I exhausted my lyrical recall for the title song, I moved on to “Watching The Detectives” and then to “All the Angels Want To Wear My Red Shoes”.

I remember playing that song one night with the Rory Calhoun Band at a happening kinda place north of Dayton called McNasty’s. A dear friend came strolling in wearing red shoes! McNasty’s was a big party barn and the RCB was a big party band. That sort of coincidence is certainly enough to cement a feeling of cosmic connection!

Rory just loved to sing the rowdy rocker “Mystery Dance’ off of that recording too.

It's a wonderful album that still holds up well! If you aren't familiar with it, this is a classic recording:

As I continued the process of making breakfast, I began to reminisce about where I was geographically and in my life when I first heard the song “My Aim Is True” and that amazing album. MJ and I were living in Oxford and I had just started working at a Horizon Records. This was the first job I ever had that just “wasn’t the right fit”. I’m sure the owners wanted someone with an effervescent personality as opposed to a brooding philosophical folk rocker, and I lasted one, maybe two weeks. Yep, I was "let go", fired from a record store! But as I was leaving, I took advantage of my employee discount and bought a couple of records. I got EC’s Slow Hand and was torn between this new Elvis Costello recording or the Pete Townsend/Ronnie Land album “Rough Mix”. I took Elvis home.

My old friend Cincinnati Slim, says “The Blues Is the Truth” as it is a genre of music that has transcended many cultures and is used to celebrate all elements of the human condition. Slim is great BTW and do yourself a favor and check him out! He is the real deal... He is such a great player that I wouldn't get on stage with him when he was playing with the Head Hunters. I didn't believe I could add anything to what they were doing. And Slim is right and blues are a basic expression of true emotion.

But there are other forms of music that are true too. A few weeks ago another friend dear friend Wes Wertz shared that years ago how when his daughter Lauren was little she called classical music, “Picture Music” because even though it had no words, it created images in her mind. How beautiful!

This morning for some reason, I enjoyed a little spontaneous outburst of a song I first heard over forty years ago and found myself floating down an emotional stream full of beautiful recollections. Music has a magical ability to trigger those emotional reactions and recollections and these experiences certainly enrich my life.

Last night I did a formal presentation on one facet of conservation efforts in Ohio. I was invited to sing a song or two at the end of the program and I played “Wound Too Tight”. I introduced the song in the context of the importance of nature and out of door experiences in reducing stress. I followed that with “Rivers and Trails” offering the observation that the way to overcome the emotional fatigue many outdoor and nature enthusiasts suffer due to the endless onslaught of environmental degradation is to celebrate the collective efforts and successes of those working locally, regionally, nationally and across the planet to make the world a better place.

The music made the program so much better. The audience immediately became more interactive and engaged. As I was packing up a lady came to me and want to tell me how my songs resonated with her. She shared how her spouse had left her a few years ago and told me that she turned to and embraced nature. Every day regardless of weather or schedule, she went on a walk in the local Metropark and this helped her with her emotional recovery. It was so sweet of her to share that and encourage me to continue to do what I do.

I have been remarkably blessed that both nature and music have been significant factors in my life and I find myself in the unique position of being able to promote the attributes of both. I suppose it is something I need to keep doing.

This week I will be performing at four showcases at the Folk Alliance Midwest Region conference in Grand Rapids this week. I can only hope that "my aim is true" with song selection and performance.